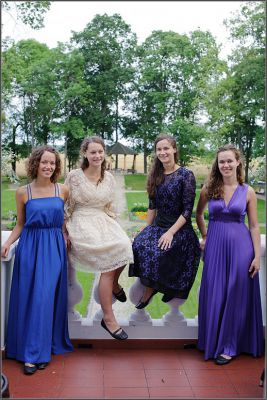 All the performances of Regnum Musicale are full of youthful energy. The young artists are playing music that brightens the everyday life, lifts the listeners away from the worldly things. The primary goal of the ensemble is to promote classical music, especially the composers creating harp music. Regnum Musicale is also paying a lot of attention to Lithuanian folk music, using its melodies in improvisations.

Regnum Musicale is often invited to play in festivals, family and business events, participate in modern art projects. The young artists are open to all the genres of music, from classical to jazz and folk. Improvisations, including singing, dancing and theatricalised performances - four sisters of Regnum Musicale are ready to explore the depths of musical expression.

You are welcome to contact us to prepare a wonderful surprise for your event!

"This music is like warm sunlight playing in the icicles, like strands of joy and blessings for your heart!"

Regnum Musicale is a family ensemble, created by violinist Raimonda Daunienė. As a mother, the creator of the ensemble has led the four daughters to the road of music. All the four sisters grew up in the light of arts, music and magic Lithuanian nature. They have chosen their most beloved instruments and now, educated in the well-known European music colleges (Haute Ecole de Musique de Geneve, Music Conservatory of Amsterdam and Manchester Royal Northern College Of Music), the four sisters of Regnum Musicale are constantly developing, improvising and redefining their performances. The family values are the keys to perfection and excitement that Regnum Musicale is bringing to the world of classical music.

Regnum Musicale has received the 1st prize in the international Chamber Music competition Concurso Iberico in Madrid, Spain, organized the marathon of concerts in the USA, participated in international competitions in Switzerland, the Netherlands, Lithuania and other European countries.

"They are like four angels who descended to earth with one aim: to thrill our hearts with musical sounds. The performance of Regnum Musicale is carried out by four sisters with wavy hair and vibrant eyes ... "

With their distinctive style, highly developed musical skills and energetic passion in their acts, Regnum Musicale engages the listeners from the very first encounter and bring real excitement to the world of classical music. The ensemble's flexible commitment to performing classical music alongside more improvised repertoire enables them to present programs of great variety and depth. The group's choice of the musical range has favoured works by such composers, Bach, Reinecke, Gaubert, Vivaldi, Mendelssohn, Saint-Saens, Bolling, Rossini, Schubert, Bartholdy, Barkauskas, Pakalnis foremost on the list. Of course, Regnum Musicale includes a variety of popular music compositions and improvisations, followed by Lithuanian ethnic music.

"The concert is worth everyone's attention: beautiful flowers blossomed..."

All four sisters are renowned winners of international competitions and had been highly appreciated in their native country for high musical achievements and promotion of Lithuania abroad. Regnum Musicale has been touring and performing successfully for over nine years. The ensemble has performed throughout Lithuania and has made a few successful tours across Europe and United States. It typically performs more than 60 concerts yearly.

The heart of Regnum Musicale performance is four artistic sisters creating a magic-filled musical tale that unlocks new sound spaces and touches one's soul. As a fan of Regnum Musicale once said, “The remains of your marvelous music sometimes just rise into the surface moments before falling asleep or waking up, and then I think life is so beautiful”.

Possessing an enviable combination of talent and energy, this unique family ensemble has long been the natural subject for the press.

"Successful and very creative steps are taken by these young and really talented artists from the foreign schools..."